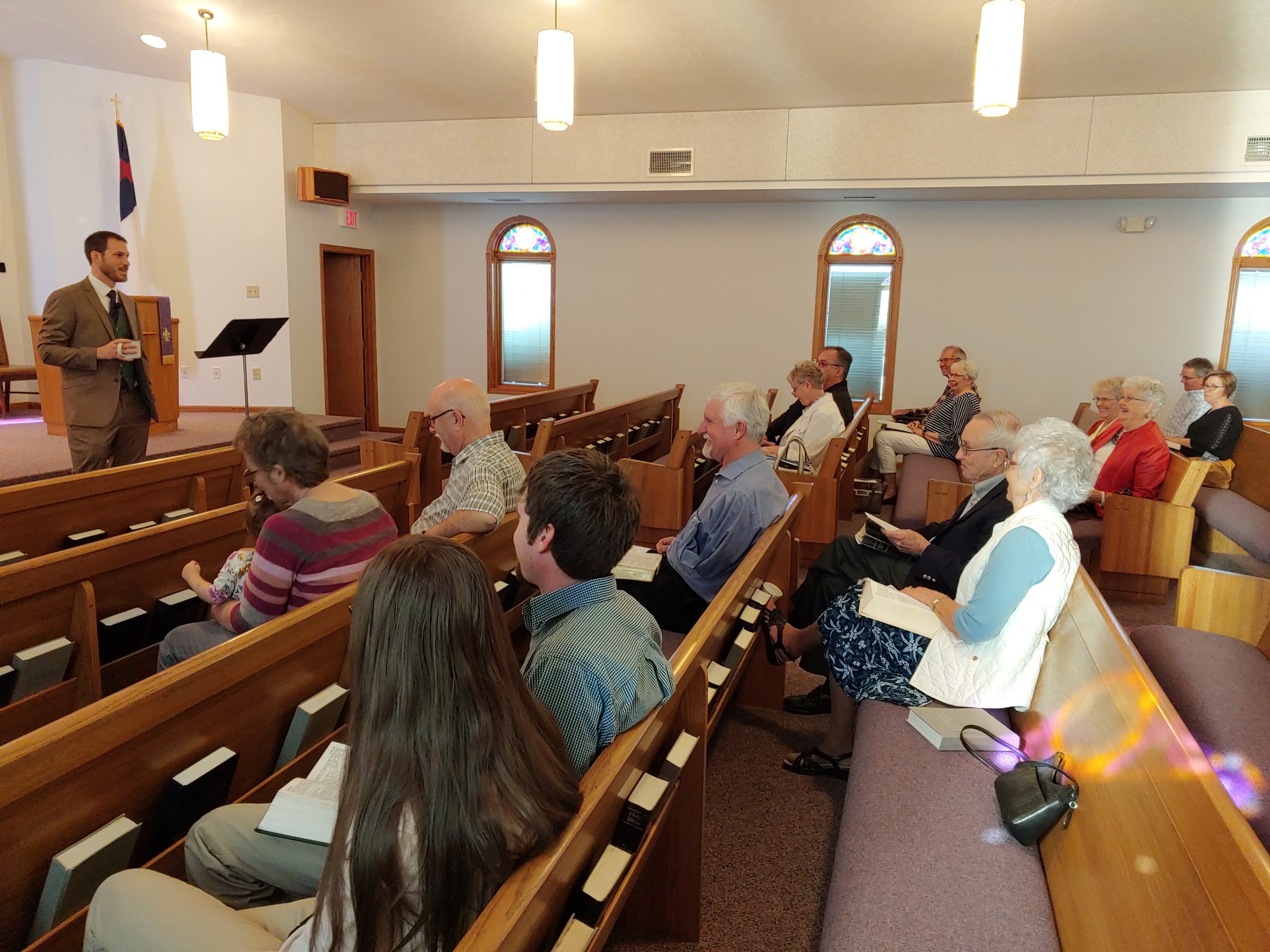 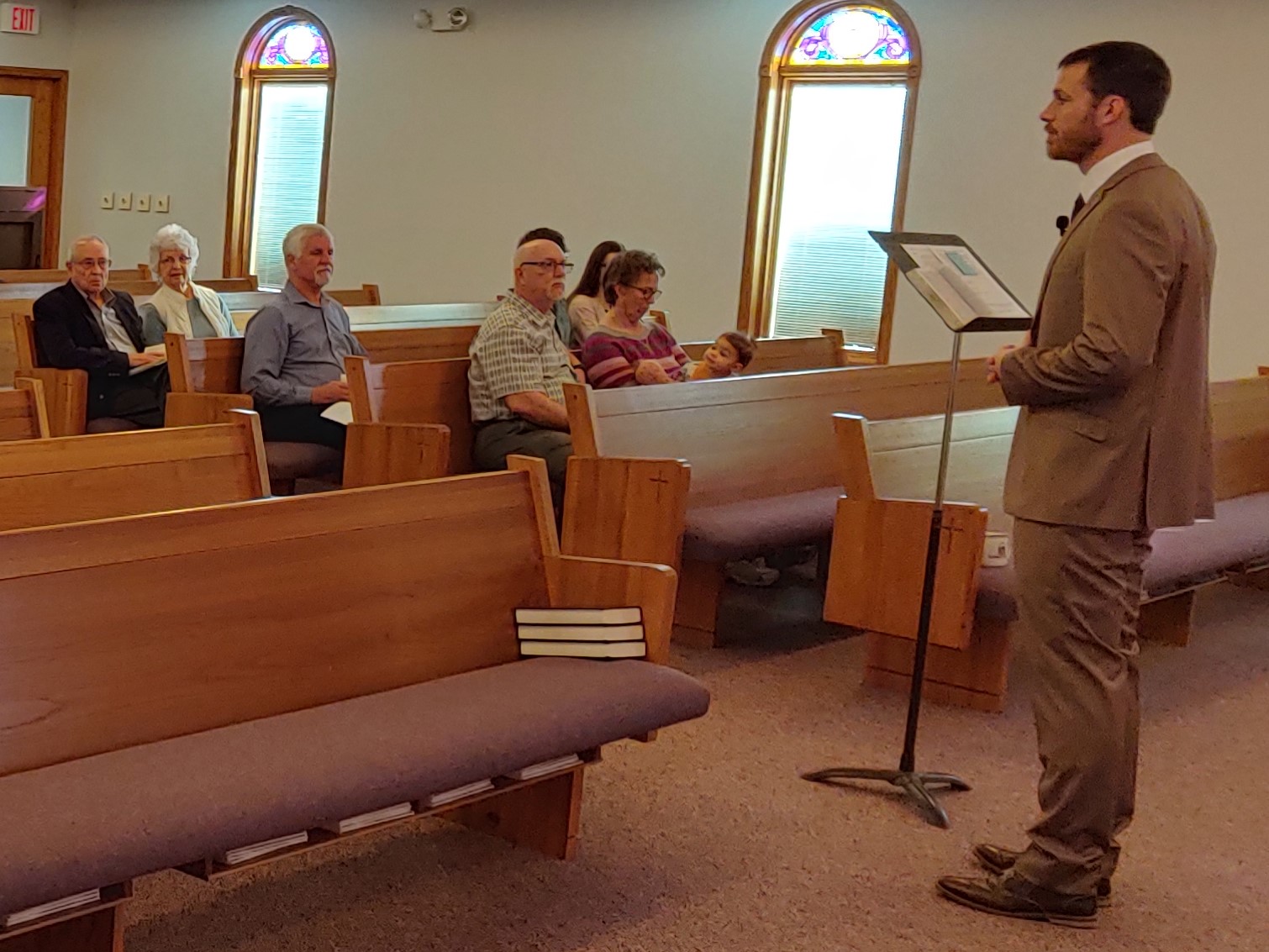 Coach John Wooden is infamous for emphasizing the fundamentals. I know nothing of the college basketball world, but I do know this: Coach Wooden stressed the fundamentals, going so far as teaching his college players (yes, COLLEGE players) how to put their socks on. These weren’t kindergartners, but legal adults. And he’s teaching them how to put on their socks? I can imagine the grumbling that took place when these talented players came together for their first practice to learn how to put on socks. It is absurd, belittling, and demeaning, until you understand why Coach Wooden did what he did. If you were to ask any of his former players, my guess is that you would be hard-pressed to find one who doesn’t have the utmost respect for Coach Wooden and his techniques. His players came to an understanding and appreciation for the fundamentals.
Knowing and using these principles gave his players a greater knowledge of the game of basketball and greater freedom to play the game. In Coach Wooden’s words, he “created a foundation on which individual initiative and imagination can flourish.” Learning the fundamentals makes a better ball player.
The same could be said about being a member in a congregation. When you know the fundamentals of the congregation, “individual initiative and imagination can flourish,” or in this case, believers are set free to do the work that God has uniquely called them to do. Do you know the fundamentals?
The formation of the AFLC came about when the Lutheran Free Church was to be absorbed into a merger. The decision was made to remain a church body continuing upon the foundation set forth in the twelve Fundamental Principles of the Lutheran Free Church.
These principles weren’t developed by a few men deciding how best to organize a congregation, but by individuals who sought to establish congregations according to principles set forth in the Word of God. Taking into account that you will not find 1st Organizations and 2nd Organizations in the Bible, these men searched the Scriptures and observed how the writers described the congregation and the members therein. They noted how God defined the body of believers and the work all are called to do. Using the Word of God as the foundation, they developed these twelve Fundamental Principles.
Let me ask you this: Do you know them? Our congregation had the privilege of piloting a Bible study on these Principles that Ambassador Publications is producing. When I first pitched the idea to our congregation, no one was doing cartwheels. In fact, here is what two ladies had to say:

“When our Pastor proposed the idea of studying the AFLC Fundamental Principles, my first thought
was, ‘Oh no . . . this is going to be so boring.’ Then my next thought was, ‘I want to study the Bible, not
the opinions, ideas, and beliefs of a group of men.’” –K

“When we first began this study on ‘Fundamental Principles,’ it really didn’t sound very interesting to
me. In fact, it just sounded so ‘stiff’ and legalistic and possibly boring and not very interesting.” –D

I would liken these two members to the talented basketball players bumping their gums about learning how to put on socks. They’ve been Christians longer than I’ve been alive; actually, twice as long as I’ve been alive. Needless to say, my “players” were not too thrilled.
But then we started studying. It was quickly discovered that this study is anything but boring. We’ve been walking through this study for over a year now and have found that there are those who will watch the class at home if they miss a Sunday so they are not missing out. Who does that?
Here’s what the two members concluded about their initial assessments:
“I was wrong on both counts concerning this study being boring and pointless. In studying these principles, they always led us first directly to the Word, not a paraphrase or summary of how some person interpreted them. We opened our Bibles to check closely the foundation used to establish the AFLC church. Is that what the Word said? Was it being interpreted correctly? We were expected to think and study and discuss. Using Acts 17:11 as our guide, we examined the Scriptures eagerly to see if what these Fundamental Principles said was true. And then, did we believe it?” –K

“. . . as we got into the study more, I realized there was a lot of ‘food for thought’ based on Scriptures,
which encouraged good discussion and response from the group present . . . making people ‘dig
deeper’ into the Word themselves . . .” –D

“Because the Fundamental Principles are based on the Word of God, which is truth in its purest
form, we learned that feelings, emotions, and opinions are not the ‘leaders’ of the congregational
community. This helps in the smooth functioning of a Church itself and how the churches function
in an association. God knew what He was doing by instructing us to use His precepts, and not our
own.”–K

This Fundamental Principles study has given us a greater appreciation for local congregations, the visible form of the Kingdom of God on earth.
Returning to the basketball analogy: through His Word, God has used these fundamentals to teach us how “to put on our socks.” We have each learned to play our position, participate on a team, and work together to accomplish the goals.
What is the goal of the Fundamental Principles?
That we should know what God says the congregation is and know the Kingdom work that God has called and equipped each of us for so that we go out and “play the game,” seeking salvation for ourselves and for our fellowman, as directed by the Word of God.

Note:
Ambassador Publications plans to publish a Bible study on the Fundamental Principles later in 2021.
The preliminary study sessions at Abiding Word can be viewed on their YouTube channel. 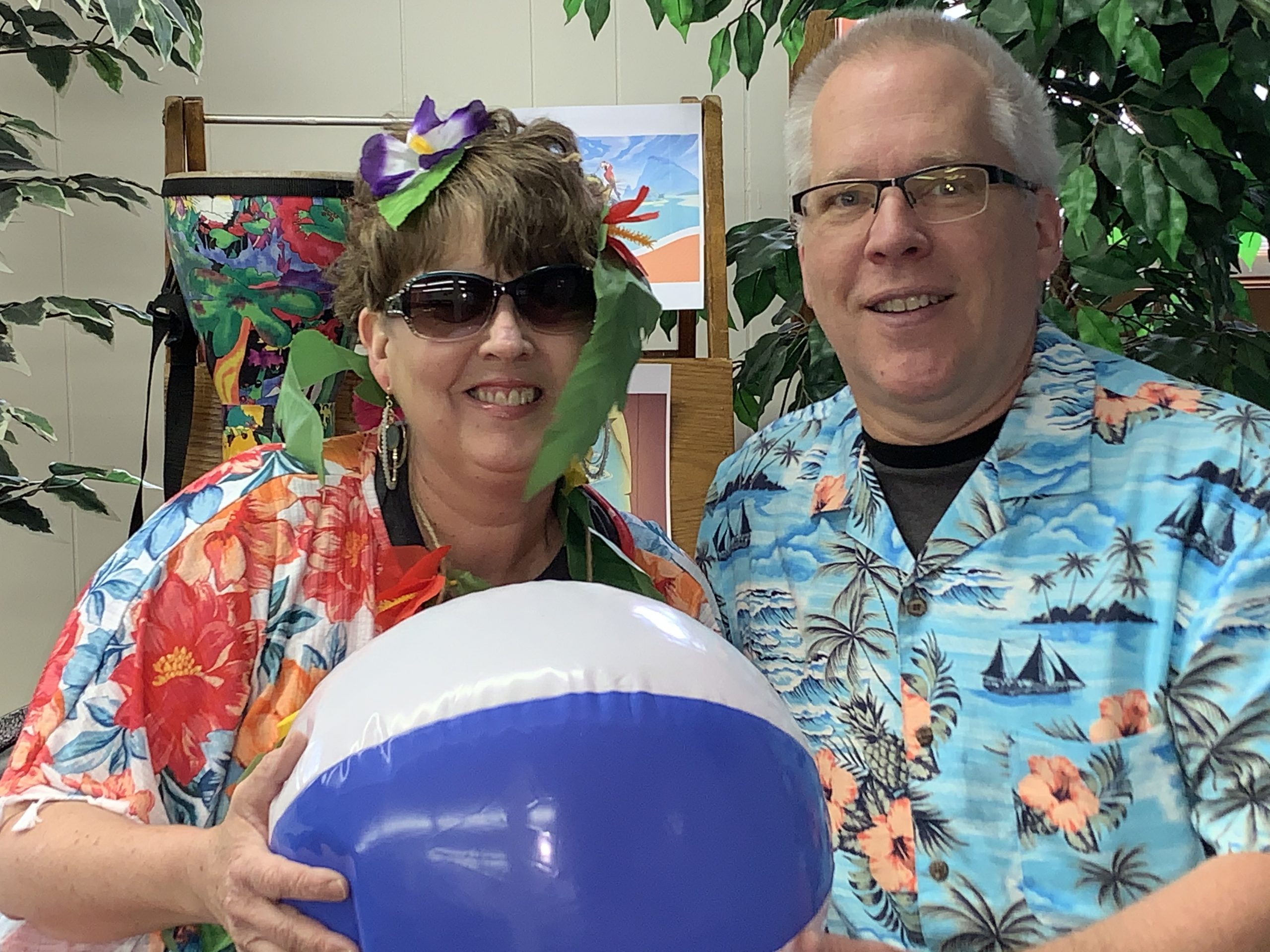 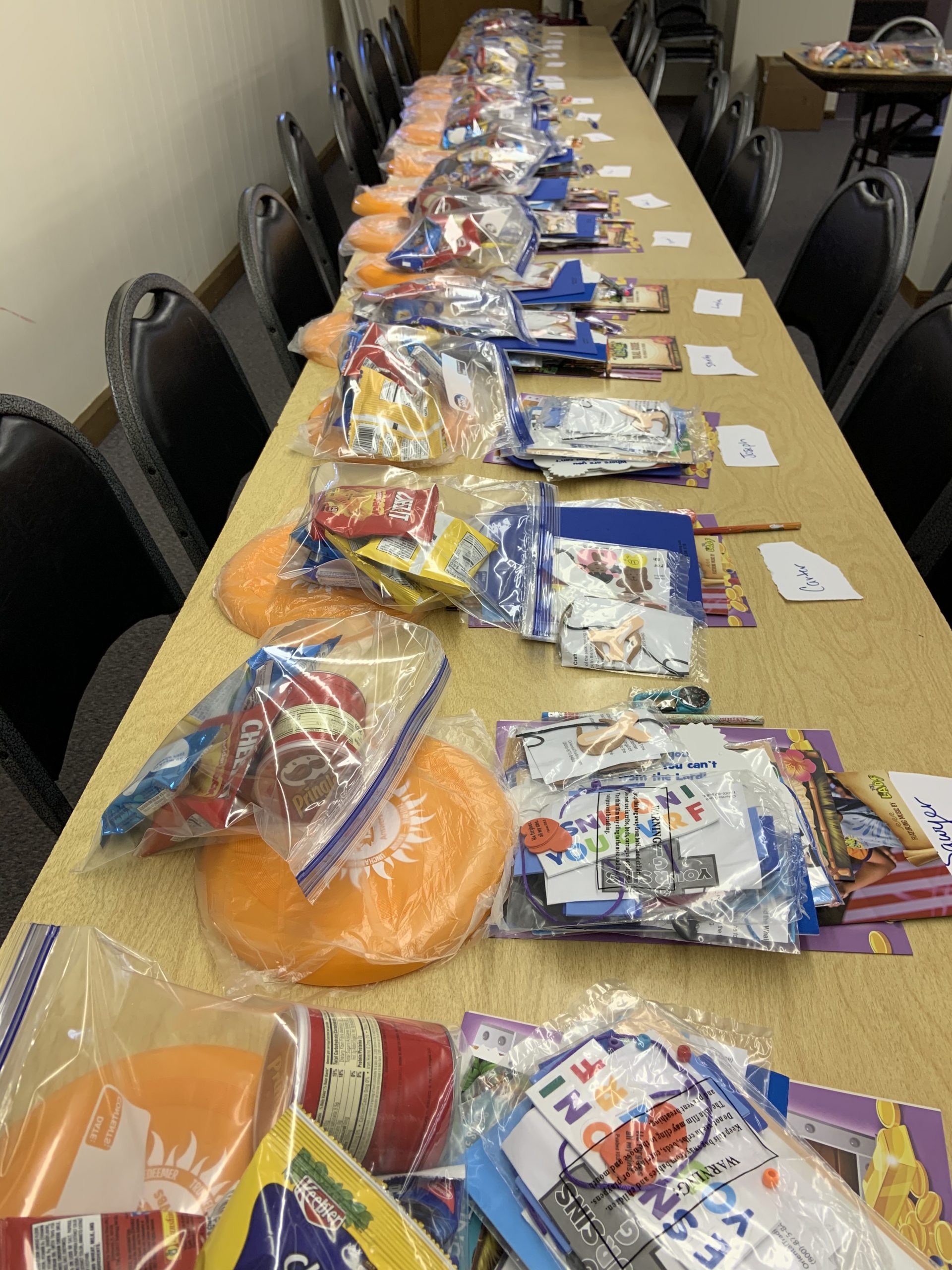 The end of the school year found us scrambling for ideas on how our churches’ children’s ministry would continue to function. Almost overnight, our Release Time (religious education) classes were cancelled, Sunday School was no more, and it looked like VBS most likely wouldn’t be happening in 2020. Then, we prayed. We began to brainstorm, bouncing ideas off of each other. Soon, some solutions to our predicament started to form. And so, we would like to share with you what we have done, and are doing, in hopes of reaching our community’s children with the Gospel during this Co-vid Pandemic.

A year ago we had invested in a Betty Lukens Flannelgraph Set. The best investment we’ve made for church! We continued to teach our Release Time lessons by videoing our Bible stories taught with brightly colored flannel figures and sharing them online. We also included a Scripture memory verse each week. Sunday school found us also using the flannelgraph at times, and at others, using the wonderful children’s videos that Marian Christopherson shared. (https://www.ambassadorpublications.org/) We also dusted off our puppet skills and did a few skits for some Sundays.

As I write this, we are in the process of taping and editing VBS lessons for our students. We have added the monikers “Daring Dave” and “Seaside Sarah” to our Mystery Island VBS personas. Thanks to a Thrivent grant, we ordered enough materials for our 30 students— workbooks, trail guides, songbooks, a music CD (one per family), crafts and snacks for each day, and some fun goodies as well. Even though it’s getting harder on the body to do puppets, and our minds sometimes lag behind our words, this grandpa and grandma are having a blast dressing up in island attire and doing our best to create interest while teaching the important truths from God’s Word. We will deliver each students VBS Bag and present them with  a Hawaiian lei this coming Sunday to kick off virtual VBS. Our past Release Time videos are on our church website, and our upcoming VBS videos will be posted there too at https://badgercreek-oilandparish.org

Note: the Betty Lukens Flannelgraph can be ordered from https://www.ambassadorpublications.org/store/product/betty-lukens-flannelgraph-sets/ 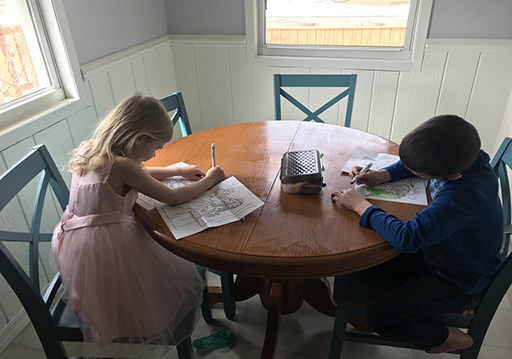 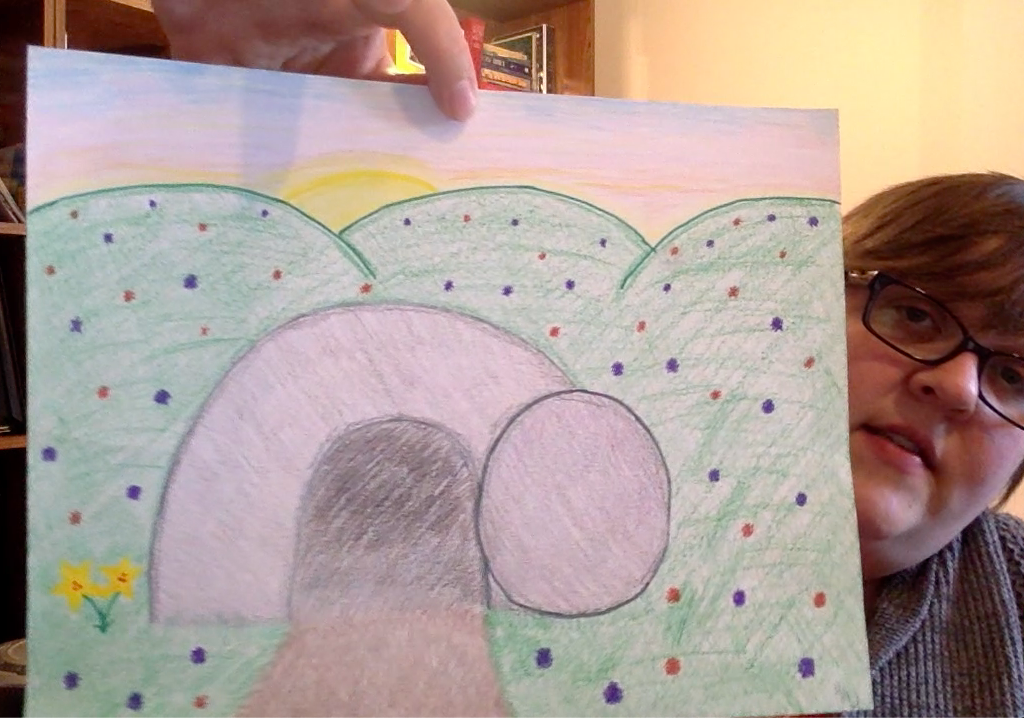