The Fabricated Luther: Refuting Nazi Connections and Other Modern Myths

The 500th anniversary of Martin Luther nailing the 95 theses to the door of the church in Wittenberg, thus marking the beginning of the Lutheran Reformation, has been cause for much celebration and has created a renewed interest in Lutheran doctrine. There has also been, and unfortunately so, a renewed movement to criticize both the man Martin Luther and certain aspects of his teaching.

While it is true that Luther was not perfect, and there is plenty of material out there to examine critically, much of this renewed criticism is unwarranted. This is especially the case in Luther’s doctrine of “the two kingdoms” and its apparent use by Lutherans during Third Reich, which enabled the atrocities of World War II.

Journalist Uwe Siemon-Netto, himself a German, addresses these criticisms, offering corrections to blatant falsehoods and misunderstandings alike while also faithfully laying out an accurate articulation of the doctrine of the two kingdoms in his book The Fabricated Luther. Originally composed as his doctoral thesis, Siemon-Netto displays his gifts for both thorough research as well as an easy-to-read-and-understand writing style in The Fabricated Luther.

The book opens with Siemon-Netto’s premise for the entire project: “Used as a metaphor for a particular way of thinking, clichés distinguish themselves by their ‘capacity to bypass reflection and thus unconsciously to work on the mind, while excluding potential relativizations.” Clichés are unable to give a truthful picture of any given object because clichés are never more than two-dimensional and will never change.

Herein lies the problem with the criticism that the Nazis used Luther and the doctrine of the two kingdoms as license to eradicate Jews and commit the other horrors that led to World War II. The accusation behind this criticism is that Lutheran pastors, and Lutherans in general, failed to stand up to the Nazis in the years that led up to the war and during the war itself.

Siemon-Netto takes this criticism head on and demonstrates not only how it is false, but also takes the time to delineate the history of Lutheran resistance, writing about such figures as Dietrich Bonhoeffer and Carl Goerdeler (a figure in history I was unfamiliar with but now have a great desire to learn more about).

The Fabricated Luther then moves from World War II history to the Lutheran role in resisting and overthrowing communism in East Germany, culminating with the destruction of the Berlin Wall in 1989. Siemon-Netto highlights how the liberal, modern church attempted to address the “situation of the world we live in” and ended up with empty pews, while the faithful churches, where orthodox Lutheran sermons were preached, were filling up with young people en masse. This culminated with a Lutheran-led, peaceful protest to communism just before the Berlin Wall came down.

The Fabricated Luther is an interesting, enjoyable, and accessible read that I highly recommend to anyone interested in Lutheran history, Lutheran doctrine, or both. It will serve to be clarifying both on confusing matters of history as well as Lutheran teaching. 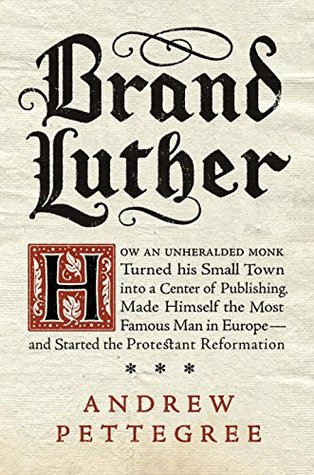 Order Brand Luther: 1517, Printing, and Making of the Reformation here.

Order The Life and Faith of Martin Luther here. 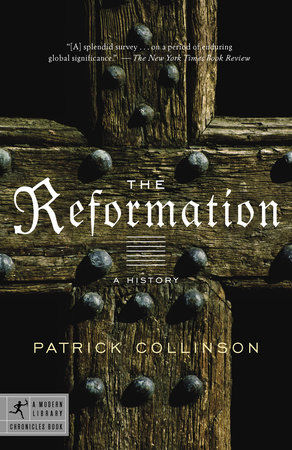 Order The Reformation: A History here. 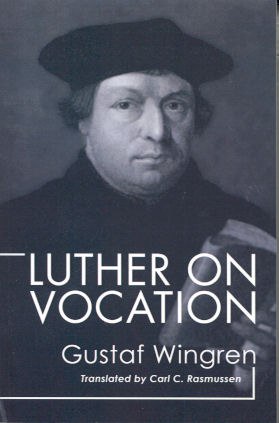 In the preface to Gene Veith’s book, God at Work, he takes time to thank the individual who introduced him to a book on vocation. That book was Luther on Vocation by Gustaf Wingren, and it significantly influenced Veith. God at Work and Family Vocation, as well as other books written by Veith, bear the marks of the influence of Wingren’s work. I don’t remember who introduced me to Veith’s book, but before I was finished reading God at Work, I had ordered Luther on Vocation.

As the title indicates, Wingren has taken Luther’s theology on the topic of vocation and communicated that to us. Luther teaches that vocation is not about how we are justified before God—that comes about by God’s grace through faith in the Gospel. However, in this world the Lord gives us “stations” or various “vocations” by which He uses us to help and encourage our neighbor. These vocations are where the devil attacks and Christians “bear their crosses,” suffering through the battle of this life until they join their Savior in heaven.

Wingren’s writing helps us to understand that believers exist in two realms or kingdoms that operate in vastly different ways. As we understand the Scriptures’ teaching on this, we come to rest in Christ’s forgiveness for our salvation and to serve our neighbor joyfully and to his benefit. Wingren states it memorably in this way: “God does not need our good works, but our neighbor does” (p.10). As Wingren explores Luther’s writings, he shows the great usefulness of living and serving in the station in which God has placed us. Often, despite ourselves, we help our neighbors by continuing to be farmers, or doctors, or garbage men.

The most intriguing section to me is the definition of love and what it looks like in the world. Wingren describes how Luther makes clear that the Christian loves not in a stereotypical fashion, but “love discovers for itself what is of the greatest benefit to a neighbor” (p.49). What this means is that the “love” which we show to others is not found on a checklist. Through our vocations, God uses us to love people around us, helping them in ways that no other person might be able to care for them. Wingren’s treatment of Luther’s writing on vocation would be of great benefit to anyone who picks it up to read and hear what God’s Word teaches on this topic. 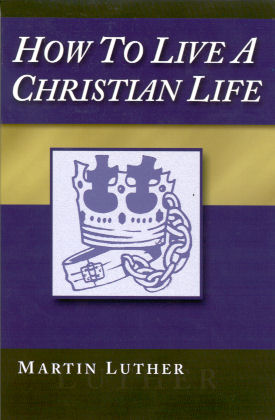 Order How to Live a Christian Life here. 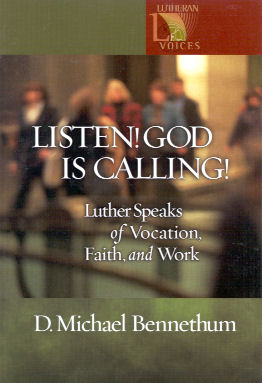 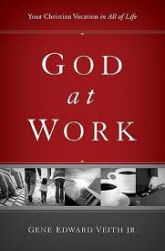 Order God at Work: Your Christian Vocation in All of Life here. 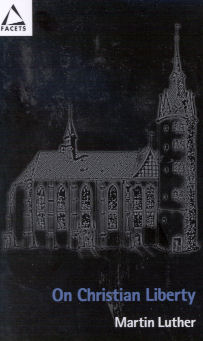 Martin Luther’s treatise, On Christian Liberty, remains one of the most influential of his many works. In this work, Luther declares how the Christian, or believer in Christ, is perfectly free from sin, death, and the devil through faith in Christ. At the same time, this does not give the believer license to act as he or she wishes, but rather gives believers the great opportunity to love and serve their neighbors. This is what God, in Christ, has done for His children.

To lay the groundwork for these, Luther devotes the first major section to distinguishing between the dual natures of the human being as an “inner” and “outer” person. The “inner person” is the “new man.” This is the new spiritual nature as a child of God. The “outer person” is the “old man.” This is the “fleshly nature.” Luther bases this distinction on II Corinthians 4:16 and Galatians 5:17. The believer’s soul freedom is not an external liberty, but one that God gives as an endorsement of the Word of God (see John 11:25, Matthew 4:4). The one thing needful for the soul’s freedom is the Word of God, that is, the Gospel of Jesus Christ. Luther develops this truth further with references from Romans 1:1-6, 16, 17 and 10:4, 9.

Luther then turns to the outer person and the relationship of faith and works. Works do not contribute to salvation, but they are necessary for loving and serving our neighbor. Good works do not make a good person, but living faith in Christ results in good works. The Christian works to have something to give to his neighbor (Ephesians 5:28). He looks out for the interests of others (Philippians 2:1-4). Christ’s life of humility and service is the example of the Christian’s life of service to his neighbor. Faith gives the Christian all things that Christ has and now the Christian gives himself to his neighbor, just as Christ gave Himself for him (pp.80-84).

In his “final clarification,” Luther emphasizes that Christian freedom is not a license to follow fleshly passions or worldly desires (p.89).

Luther summarizes his argument well in his conclusion: “In conclusion, as Christians we do not live in ourselves, but in Christ and the neighbor. Otherwise we are not Christian. As Christians, we live in Christ through faith and in the neighbor through love” (pp.88-89).

This short book gives a great explanation on Christian liberty, and I heartily commend it to your reading! It gives great insight into the issues that Luther faced in his day, and with the response which we also need today! 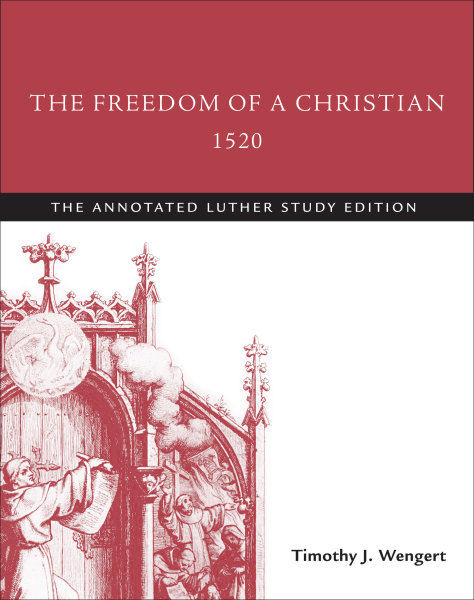 Order Luther on the Christian Life: Cross and Freedom here.

As Luther Taught the Word of Truth: Devotions on the Small Catechism 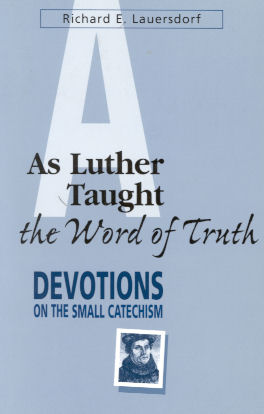 Have you ever thought of Luther’s Small Catechism as a daily devotion? Luther in his Preface to the Large Catechism stated: “I am . . . a doctor and preacher; yes, as learned and experienced as all the people who have such assumptions and contentment. Yet I act as a child who is being taught the catechism. Every morning—and whenever I have time—I read and say, word for word, the Ten Commandments, the Creed, the Lord’s Prayer, the Psalms, and such. I must still read and study them daily. Yet I cannot master the catechism as I wish. But I must remain a child and pupil of the catechism, and am glad to remain so.” [1] If Dr. Luther needed such daily devotion, don’t we also?

In his book As Luther Taught the Word of Truth: Devotions on the Small Catechism, Pastor Richard E. Lauersdorf provides a valuable resource to help readers learn the catechism through a series of fifty-eight devotions. Each devotion focuses on a portion of the five chief parts of the catechism: the Commandments, Apostles’ Creed, Lord’s Prayer, and Sacraments of Holy Baptism and Holy Communion. Each devotion provides biblical insight and practical application with helpful illustrations. At the end of each devotion, there is a simple prayer or hymn verse summarizing the devotional thought.

Lauersdorf slightly changes the order of the catechism. He begins with a series of devotions on the Apostle’s Creed rather than the Ten Commandments. He states, “Before we discuss what God wants us to do for him, we need to look at what he has done for us” (p.4). With this change in the order, he emphasizes the Gospel’s power to empower the Christian life. This is an interesting insight.

This book would be a beneficial aid in a pastor’s ministry. It would be a great devotional resource for confirmation instruction and adult membership classes. It could be used as a much needed review of Christian truth for elder and deacon board meetings. This book can also be given as a gift to confirmation students, new congregational members, pastors, church workers, or anyone in need of renewal in the basics of the Christian faith. In other words, it would be beneficial for all.

Order Concordia The Lutheran Confessions: A Reader’s Edition of the Book of Concord here.